From the mysterious Tree of Life to the world’s largest underwater theme park, these are the most interesting facts about Bahrain.

1. Bahrain is the third-smallest country in Asia – only the city-state of Singapore and the Maldives have smaller landmasses.
– Source: World Bank

3. Bahrain is an island nation, but it is connected to the mainland east coast of Saudi Arabia by the King Fahd Causeway, a 25km roadway opened in 1986 that connects the two countries.
– Source: The Guardian

4. Due to a ban on women driving in Saudi Arabia from 1957 to 2018, the causeway was the only bridge in the world where women could drive on it one side (Bahrain), but not the other (Saudi Arabia). The border is located roughly halfway across the causeway.
– Source: The Guardian

6. Bahrain is the biggest per-capita consumer of electricity in Asia and the third biggest in the world, after Iceland and Norway.
– Source: World Bank

7. Bahrain was once the seat of the empire of Dilmun (3200–330 BC), whose influence spread as far north as modern Kuwait and deep into eastern Saudi Arabia.
– Source: Lonely Planet

8. There are more than 100,000 Dilmun-era burial mounds (ancient grave mounds) spread across Bahrain, most of them constructed between 2200 and 1750 BCE. 21 of these archaeological sites have been inscribed as the Dilmun Burial Mounds UNESCO World Heritage Site.
– Source: Lonely Planet, UNESCO

10. Bahrain is an archipelago consisting of 33 natural islands and an additional 51 artificial islands created from land reclamation projects.
– Source: The Telegraph

11. Durrat Al Bahrain is a series of 14 large artificial islands that cost $6 billion (USD) to construct. The islands are designed to look like flower petals and are used for residential housing as well as tourism with luxury hotels and shopping malls.
– Source: NASA

12. Since 1782 (possibly 1783), the Al Khalifa family has ruled Bahrain and is still in power today.
– Source: Encyclopedia.com

13. Bahrain was under British administration until 1971 when it gained full independence.
– Source: BBC News

14. In 2011, the country saw widespread pro-democracy protests inspired by similar revolts that overthrew rulers in Tunisia and Egypt. Saudi Arabian troops were called in to suppress the pro-democracy activists.
– Source: New York Times

15. Bahrain is home to the Tree of Life, a single mesquite tree planted around 1583 in the southern desert. It is still unclear what sustains the tree as there are no obvious water sources nearby.
– Source: Lonely Planet

16. Bahrain has a long history of harvesting pearls from oyster beds in the Persian Gulf. Merchant buildings, shops, storehouses, a mosque, a fortress and offshore oyster beds located across Bahrain been inscribed as the ‘Pearling, Testimony of an Island Economy’ UNESCO World Heritage site.
– Source: UNESCO

17. Bahrain was one of the first states in the Gulf to discover oil when in 1931 it discovered its first oil reserve and began drilling.
– Source: BBC News

18. The Bahrain World Trade Center (pictured above) was the world’s first skyscraper to integrate wind turbines into its design.
– Source: Reuters

19. Bahrain has to the world’s largest underwater theme park called Dive Bahrain. The park is spread across 100,000 sq meters and has a 70m fully submerged Boeing 747 jumbo jet aeroplane.
– Source: The Independent

20. The Bahraini flag consists of a red background, which is the traditional colour for flags of Persian Gulf states, with a white serrated strip separated by five triangles that reflect the five pillars of Islam.
– Source: CIA World Fact Book

Every effort has been made to verify these facts about Bahrain. However, if you find an error or have any questions, please contact us. 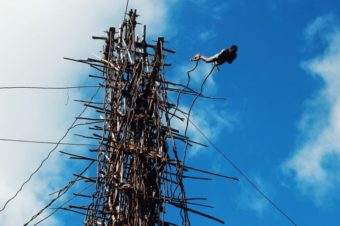 Interesting facts about Vanuatu include bungee jumping, worshipping a British prince and being one of... Read More