The most interesting facts about Kuwait, from remote control camel racing to one of the richest populations in the world.

1. Kuwait is a tiny country in the Middle East and Asia bordering Saudi Arabia, Iraq and Iran.
– Source: BBC News

3. Evidence of the first settlement in Kuwait dates from 4500 BC.
– Source: Lonely Planet

4. In 2001, archaeologists believe they discovered the remains of the world’s oldest ocean-going boat in Kuwait. The bitumen pieces indented with reeds and barnacles date from around 5000 BC.
– Source: The Telegraph

5. Ancient Greece once colonised the Kuwaiti island of Failaki, then named Ikaros, between 2000 and 1000 BC. It became an important trading post on the route from Mesopotamia to India.
– Source: BBC News

6. During the 1600s Kuwait became part of the Ottoman Empire and during the 1700s settlers arrived at the site of present-day Kuwait City transforming it into a trading hub during the 1800s.
– Source: BBC News

8. Kuwait has been ruled by the Al-Sabah dynasty since 1756 and continues to retain absolute power.
– Source: Britannica

10. In 1990, Iraq invaded and annexed Kuwait accusing the country of stealing its oil from a field near the border. In 1991, a US-led and UN-backed bombing military campaign liberated Kuwait in what became known as the Gulf War or the Persian Gulf War.
– Source: BBC News

11. In 2003, American forces invaded Iraq from Kuwait in the Second Iraq War that led to the ousting of Iraqi leader Saddam Hussein.
– Source: Britannica

12. Kuwait is building the world’s tallest skyscraper. The proposed 1,001m (3,284ft) Burj Mubarak al-Kabir is expected to be completed in 2030. Its height is a reference to the classic collection of Middle Eastern and South Asian folk tales, One Thousand and One Arabian Nights.
– Source: Popular Mechanics

13. Kuwait is the world’s 11th most obese country. It is the highest-ranked non-Pacific island nation with 73.4% of its population classified as obese.
– Source: World Health Organisation

15. As of 2020, Kuwait is the eighth richest country per capita when measured by GDP (PPP) per capita.
– Source: International Monetary Fund (IMF)

16. Around 70% of Kuwait’s population are expats with around 3.4 million foreigners living in the country. However, Kuwaiti Prime Minister Sheikh Sabah Al Khalid Al Sabah recently announced he intends to reduce the expat population to 30% of the population.
– Source: Aljazeera

17. The name Kuwait derives from the Arabic “al-Kuwayt” meaning “fortress,” perhaps a reference to a castle built on the current location of Kuwait City by the Beni Khaled tribe in the 17th century.
– Source: CIA World Fact Book

18. The Kuwaiti flag is horizontally striped green-white-red with a black truncated triangle. The colours are associated with a poem written in the 13th century by Ṣafī ad-Dīn al-Ḥilli. He spoke of the green fields of the Arabs, the black battles they face, the white purity of their deeds and the red blood on their swords.
– Source: Britannica

19. Kuwait was the first Arab country in the Gulf to have an elected parliament. In 1963, following independence in 1961, elections were held for the National Assembly.
– Source: BBC News, BBC News

20. However, women were not allowed to vote in Kuwait until 2006 when they took part in elections for the first time after a long fight for suffrage.
– Source: New York Times

21. Camel racing is popular in Kuwait and since 2005 races using robots as jockeys after children were banned from the sport. Humanoid jockeys, specifically developed for the purpose, are the size and shape of small boys and are operated by remote control.
– Source: Gulf News

22. One of Kuwait’s most famous landmarks are the Kuwait Towers, distinctive blue-green sequined water towers located in Kuwait City. The largest of the three rises to a height of 187m and features a viewing platform, gift shop and restaurant.
– Source: Lonely Planet

23. Kuwait is one of 27 countries that doesn’t have any UNESCO World Heritage Sites. It does have four properties on the Tentative List (properties intended to be submitted for nomination).
– Source: UNESCO, The Telegraph

24. Revealing the soles of the feet is considered offensive in Kuwait as is crossing your legs.
– Source: Lonely Planet

25. Kuwait has the third-lowest death rate in the world after Qatar and the UAE. On average, there are only 2.3 deaths during a year per 1,000 population at midyear.
– Source: CIA Fact World Book

26. Kuwait has no renewable freshwater resources, so instead, it relies solely upon saltwater desalination plants for freshwater.
– Source: New Scientist

Every effort has been made to verify these facts about Kuwait. However, if you find an error or have any questions, please contact us. 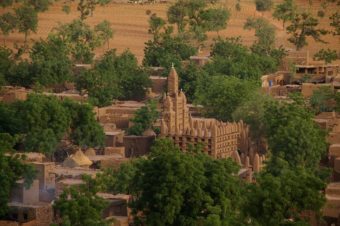