The most interesting facts about Niger include its very own dinosaur – the Nigersaurus – and the world’s highest mud-brick minaret.

3. Niger is a landlocked country as it’s entirely surrounded by land with no access to the open sea. There are currently 45 such countries and five partially recognised states. Landlocked countries often encounter economical challenges due to the disadvantages caused by a lack of sea access.
– Source: CIA World Fact Book, The Telegraph

4. Niger is one of the poorest countries in the world when measured by GDP per capita based on purchasing power parity (PPP). In 2020, is ranked fifth-poorest.
– Source: World Bank

5. Between the 10th and 18th centuries, Niger was part of several West African empires including the Kanem-Borno, Mali and Songhaï empires. All were involved in the trading of gold, salt and slaves.
– Source: Lonely Planet

6. Niger was colonised by France in 1890. In 1958, it became an autonomous republic of the French Community before achieving full independence in 1960.
– Source: BBC News

8. In 2020, Niger was ranked as the least developed country in the world according to the UN’s Human Development Index (HDI).
– Source: United Nations Development Programme (UNDP)

9. Niger’s flag is horizontally striped with an orange sun on the centre stripe. Orange represents the north and east of Niger, largely covered by the Sahara. The white of the flag is said to stand for purity and innocence and the green represents the fertile lands along the Niger River.
– Source: Britannica

10. The flag is similar to the national flags of Ireland, Ivory Coast and India. As such, this is probably why the orange sun was added to the flag which supposedly represents the presence of the tropical sun in Niger.
– Source: Britannica

11. As of 2020, Niger has the highest fertility rate in the world with an average of 6.9 children per woman.
– Source: World Bank

12. Niger is partly covered by the world’s largest hot desert (excluding the Arctic and Antarctic deserts). The Sahara Desert, with a total area of 8,600,000sq km (3,320,000sq mi), covers much of North Africa.
– Source: Britannica

13. In fact, nearly four-fifths of Niger is desert, making it one of the hottest countries in the world.
– Source: CIA World Fact Book

14. Agadez, on the southern edge of the Sahara desert, is known as “the gateway to the desert”. The UNESCO-listed town dates to the 15th century AD and was an important crossroads for the trans-Saharan caravan trade.
– Source: UNESCO

15. In the centre of town is the Grand Mosque which has a 27m-high minaret made entirely of mud-brick. It is the highest such structure in the world.
– Source: UNESCO

17. Niger is named after the Niger River that traverses the southwest of the country. It comes from the native term “Ni Gir” meaning “River Gir”.
– Source: CIA World Fact Book

18. The Niger River is West Africa’s main river and, with a length of 4,200 km (2,600mi), it is the third-longest river in Africa after the Nile and the Congo.
– Source: Britannica

19. Niger shares the UNESCO-listed W-Arly-Pendjari Complex with Benin and Burkina Faso. The complex is an important refuge for threatened wildlife in the region. It is home to the largest population of elephants in West Africa as well as other large mammals such as the African Manatee, cheetah, lion and leopard.
– Source: UNESCO

20. Niger is home to one of Africa’s largest protected areas, the Air and Ténéré Natural Reserves. The 773,600 sq km sanctuary is surrounded by the Saharian desert and includes a wide range of landscapes, plant species and wild animals.
– Source: UNESCO

21. Niger is one of the countries involved in the ambitious Great Green Wall project – a 7,000km long and 16km wide wall of trees stretching across Africa. The trees will traverse several countries along the arid Sahel savanna. from the Atlantic Ocean to the Indian Ocean. The project is behind schedule but is still planned to go ahead.
– Source: Smithsonian

22. The Cure Salee (salt cure) festival in Niger has been celebrated for centuries. The three-day annual event marks the end of the rains and sees Tuareg, Peul and Wodaabe nomads congregate on the salt flats to exchange news, perform music and dance.
– Source: Sydney Morning Herald, Outpost Magazine

23. Additionally, Niger (along with Chad, Cameroon and Nigeria) hosts the Gerewol festival, a beauty pageant where the men of a polygamous Wodaabe tribe battle it out to be chosen by unmarried women as their partners.
– Source: National Geographic, Condé Nast Traveler

25. According to the UK Foreign Office, Niger is one of 17 countries considered completely unsafe for tourists to visit.
– Source: The Telegraph

26. Niger is home to the largest known animal carvings in the world. The Dabous Giraffe Petroglyph is a life-sized carving of two giraffes estimated to be between 7,000 and 10,000 years old.
– Source: Bradshaw Foundation

27. Niger has a dinosaur named after it. The Nigersaurus – which means ‘Niger lizard’ – was a herbivorous dinosaur that lived in the region around 121-99 million years ago. Its bones have been found in Algeria, Niger and Tunisia.
– Source: Natural History Museum

Every effort has been made to verify these facts about Niger. However, if you find an error or have any questions, please contact us. 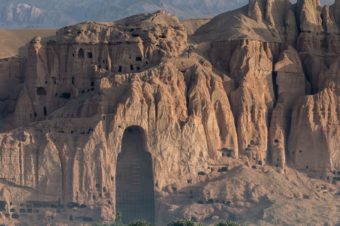 The most interesting facts about Afghanistan, from persistent instability and conflict to a country that... Read More