The most interesting facts about Senegal, from killer hippopotamuses, Africa’s Mecca and Africa’s tallest statue.

1. Senegal in West Africa has long been considered one of the region’s model democracies, boasting a history of stable government and civilian rule.
– Source: BBC News

2. Senegal has been part of several West African empires including the Kingdom of Ghana (8th century), the Tukulor Empire (11th century) and the Jolof Empire (12th-14th centuries).
– Source: BBC News

3. Senegal was of great interest to European powers. The Portuguese, British, French and Dutch all contended for control of the region due to its strategic location for trading slaves and goods.
– Source: Lonely Planet

4. The UNESCO-listed island of Gorée lies off the coast of Senegal. From the 15th to the 19th century, it was the largest slave-trading centre on the African coast.
– Source: UNESCO

5. Goree Island is home to the ‘Door of No Return’, where millions of Africans were shipped to a life of slavery in the Caribbean and the Americas.
– Source: Reuters

7. In 1960, Senegal gained independence as part of the Mali Federation – an alliance linking Senegal and the Sudanese Republic (previously French Sudan).
– Source: Britannica

9. However, the federation lasted just two months when it was dissolved following Senegal’s secession and the Sudanese Republic became the Republic of Mali.
– Source: Britannica

10. In 1982, Senegal also briefly merged with Gambia to form a confederation to combine the countries’ military and security forces. Known as the Senegambian Confederation, it was dissolved in 1989.
– Source: BBC News

11. The Senegalese flag has green, yellow and red vertical stripes with a central green star. These are pan-African colours with green (along with the star) representing hope and the country’s major religion (Islam), yellow representing the natural riches and the wealth obtained through labour and red representing the struggle for independence, life and socialism.
– Source: Britannic

12. Some drivers in Senegal attach horse, sheep or cattle hair to their taxis for good luck. Blessed by religious leaders, these tails are believed to provide good fortune.
– Source: New York Times

13. Senegal has a growing surf scene and the highly influential 1966 surfing movie The Endless Summer was part shot in Senegal.
– Source: CNN (video)

14. On Sundays in Dakar, local shepherds take their sheep for a daylong cleansing ritual. Sheep are prized as sacrifices during religious festivals and some people believe the cleaner the animal, the better the sacrifice.
– Source: New York Times

15. In 2012, Senegal began planting the Great Green Wall – a 7,000km long and 16km wide wall of trees stretching through several countries and across the arid Sahel savanna from the Atlantic Ocean to the Indian Ocean. The project is behind schedule but there is still optimism regarding its completion.
– Source: Smithsonian

16. The Dakar Rally, first held in 1978–79 and covering up to 15,000km between Southern Europe and Senegal, is considered to be the world’s most gruelling automobile race. In 2009 the rally was relocated to South America after its organizers cancelled the event due to terrorism concerns.
– Source: Britannica

17. The Cape Verde Peninsula in west-central Senegal is the westernmost point of continental Africa.
– Source: Britannica

18. Senegal is home to Fadiouth, a small car-free island made entirely of clamshells including the houses, streets and cemeteries.
– Source: National Geographic (video)

20. Senegal is known as the “Gateway to Africa” as it is served by multiple air and maritime travel routes.
– Source: Britannica

21. Lake Rose (also known as Lake Retba) in Senegal sometimes turns rosy pink due to its unusually high salt content which is 10 times that of ocean water.
– Source: Lonely Planet

22. Borom Sarret (1963), considered to be the first African film produced and directed by an African, was filmed in Senegal. It was also the first film of Senegalese director, Ousmane Sembene, who is often referred to as the “father of African cinema”.
– Source: The Guardian, The Guardian

23. Senegal is home to Africa’s tallest statue. The 49m African Renaissance Monument is said to have cost $27 million and was created by North Korean artists.
– Source: BBC News

24. Senegal’s national symbol is the lion. A lion is the soccer team’s mascot, one adorns the presidential seal and lion statues are often placed at the entrances to towns and in front of military installations. However, decades of hunting and development has almost wiped them out. Niokolo-Koba National Park holds the last remaining lion population in Senegal.
– Source: New York Times

25. In the space of 10 years, 25 fishermen were mauled to death by “killer hippopotamuses” in the rivers of Senegal.
– Source: The Telegraph

26. Besides the main languages of French and Wolof, people usually speak the language of their ethnic group such as Pulaar, Serer and 38 different African languages.
– Source: Encyclopedia.com

27. Senegal is named after the Senegal River which derives from “Azenegue,” the Portuguese word for the Berber Zenaga people who lived north of the river. Another theory is that the name originates from the Wolof “sunu gaal” which means “our boat”.
– Source: CIA World Fact Book, New World Encyclopedia

28. In 2022, Senegal will become the first African country to host an Olympic event when the Youth Olympic Games is held there.
– Source: International Olympic Committee

29. Known as “Africa’s Mecca”, the city of Touba in Senegal sees more than a million Muslim pilgrims visit it annually from around the world. The pilgrimage commemorates the Sufi Islam movement’s founder Cheikh Amadou Bamba and his exile in 1895 by French colonial authorities.
– Source: Reuters

30. Rapper and entrepreneur Akon is part-Senegalese. He recently declared that he has created his own city in Senegal called ‘Akon City’.
– Source: CNN

Every effort has been made to verify these facts about Senegal. However, if you find an error or have any questions, please contact us. 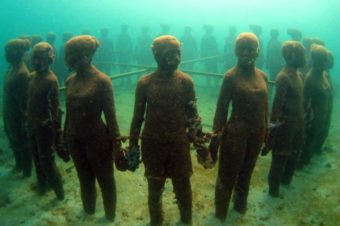